In the vehicle tank and the lines of the fuel system, dangers can lurk that very few are aware of.

While newer vehicles are increasingly equipped with plastic tanks, older cars in particular require tank rust protection. However, the legally required proportion of bioethanol fuel remains problematic for all vehicles. These fuels are known as Super Gasoline/Petrol E5 (with an ethanol content of up to 5%) or Super E10 (ethanol content of up to 10%).

What exactly is bioethanol?

Bioethanol is a simple alcohol made exclusively from biomass or biodegradable parts of waste. As early as the 1980s, this was added to gasoline to increase the octane number.

Why ethanol in the tank is so dangerous?

All alcohols are hygroscopic / water-attracting. The water thus collects in the tank and forms a perfect breeding ground for microorganisms such as bacteria, yeast and fungi. Especially with longer idle times, the alcohol is converted to acetic acid at the boundary layer between water and alcohol mixture. The biotechnical, fermentative production of acetic acid is the oxidation (respiration) of ethanol by bacteria. For this, the microorganisms only need a large amount of oxygen, which is constantly being mixed into the fuel again and again as a result of the movement. But even without bacteria in the tank, the pure aging of the bioethanol leads to the formation of acetic acid in the fuel tank. This gets through the fuel pump into the entire fuel system and can cause devastating damage through corrosion. This affects not only motor vehicles, but also motorcycles and, very often, boats. 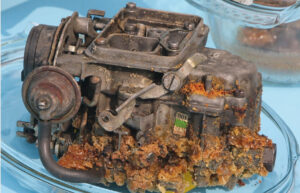 Preserving additives are only contained in petrol. However, due to the mixing ratio of 85 to 15, they are almost ineffective. Source: Oldtimer Markt 05/12

Acetic acid is one of the most aggressive corrosion accelerators.

This decomposition process means that even our modern gasoline fuels lose their ignitability in a very short time and can also mean expensive repairs due to corroded parts. In particular, classic car fans and vehicle owners with seasonal vehicles are increasingly faced with the problem that the car, motorcycle or boat can only start with difficulty or not at all in the spring.

In order to prevent the bio-ethanol problem, we have specially developed our E10 fuel protection. This binds the water in the entire fuel system to form a flammable emulsion. Thus, the hydro-fuel mixture can be discharged after the combustion process without any problems. 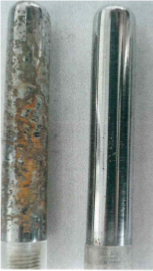 To prove the corrosion protection, we have subjected our products to the so-called “steel finger test”. In this case, a steel pin is hung into the fuel at 60 ° C for a long period of time. After just a few hours you can see how the steel begins to oxidize in the solution with the pure bioethanol fuel.

All the advantages of the E10 Engine Protector:

We recommend adding our E10 fuel protection to the fuel tank immediately before refueling. With the new dosing bottle, multiple use is now quite uncomplicated.

If you have any questions or suggestions, please contact our service team. We are happy to help you!
Mail: info@bluechemgroup.com

“bluechemGROUP in harmony with vehicles and the environment.”